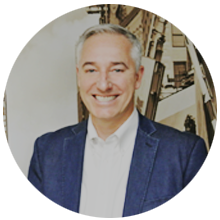 Mark was raised in Gastonia, NC and developed a passion for sign painting and design at the age of 15 when he painted a “land for sale” sign for his father’s friend. He quickly became intrigued with realizing his painting talents and natural sales abilities could result in a profitable business, and began his first company out of his parent’s garage while still in high school. Mark continued his sign business while attending Appalachian State University with a major in Advertising, graduating with a Bachelor of Science degree and a focus on media advertising.

After graduating, Mark went to work with a national billboard company and worked in the industry for the next 15 years. It was during this time that he realized the need to develop a company that worked for his client’s best interests: having existing companies bid for the client’s specific needs and creating one point of contact for the client. He also reconnected with his love of painting, and working on cars—his 1955 First Series Chevrolet truck being the subject of not only his art, but also his hobby. For the second time in his life, Mark created his own business, starting out in his home, and growing it into Red Truck Media. Now in business for almost 15 years, Red Truck Media has grown into the company it is today—with a staff of knowledgeable, hard-working executives eager to work for their client’s needs, and enjoying the exciting and supportive environment Red Truck Media is known for.

When not working, Mark enjoys spending time with his wife Ashley, and two daughters Sarah and Haley. He also enjoys fishing, shooting sporting clays, and of course working on that Red Truck!